Decision (判断, Handan?) is the seventh volume of The Promised Neverland series.

After learning the truth of the world they find themselves in, the orphans finally make their way out of the forest. With their improved survival skills, Emma, Ray and the other children arrive at the location laid out in Minerva’s hidden message. But awaiting them there is a new kind of challenge…

The cover has the series title coloured in red with a with outline. In the center of the page sit the escaped orphans of Grace Field House who are all seemingly looking at the reader. From left to right there's Anna, Gilda, Emma, Ray and Don. They are sat in what appears to be Shelter B06-32.

The Illustration features Gilda, Emma, Ray and Don half popping out of the entrance to Shelter B06-32, seemingly greeting someone by the expressions on most of the orphans' faces.

I'm so excited about the underground shelter! The water is good! The food is good! And the small space is also good! Being frugal with resources and using the garden to manage is very good!

But after a month—no, after even a week—anyone would probably start wanting sunlight.

I wonder how long the young children are going to spend underground.

Hoping they can run around in the green gardens again, they quietly wait for Emma and Ray to return. To be continued soon in volume 8.

These were things I found when I reviewed my early notes.

Krone has an amazing bod under her clothes.(*Probably talking about muscle)

What the heck? These are pretty…out there. 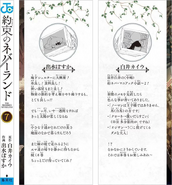 Some time after Volume 7's release, The Promised Neverland was nominated for the 22nd Tezuka Osamu Cultural Prize. The awards commemorate the contributions of the manga pioneer Osamu Tezuka, with works that are regarded as classics such as Astro Boy, Kimba the White Lion and Black Jack, by recognizing the manga that best follow his traditions.[7][8]

Later in 2018, the series as a whole won under the category of "Best Shōnen Manga" in the 63rd Shogakukan Manga Awards, one of Japan's major manga awards. The series was honored with a bronze statuette and a prize of 1 million yen (about US$9,000).[9][10]

Retrieved from "https://yakusokunoneverland.fandom.com/wiki/Volume_7?oldid=32710"
Community content is available under CC-BY-SA unless otherwise noted.