The children have successfully escaped Grace Field House, but their troubles are just beginning. Now up against a dangerous natural world and their demon pursuers, Emma and Ray struggle to lead the children to safety. Just when the situation is at its most dire, a mysterious girl suddenly appears. Is she there to help, or is it a demonic trap…? 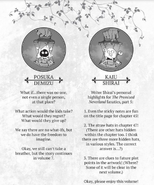 Volume 6 of The Promised Neverland was one of the 12 nominees of the 11th Manga Taishō Awards,[1] an award which helps to promote newly released titles in Japan, subject to no more than 8 volumes for each title. In late February, the volume only managed to garner a total of 26 points, earning the second last place.[2][3]

Later in 2018, the series as a whole won under the category of "Best Shōnen Manga" in the 63rd Shogakukan Manga Awards, one of Japan's major manga awards. The series was honored with a bronze statuette and a prize of 1 million yen (about US$9,000).[4][5]

Retrieved from "https://yakusokunoneverland.fandom.com/wiki/Volume_6?oldid=24660"
Community content is available under CC-BY-SA unless otherwise noted.