Behind the facade of a happy orphanage, the children of Grace Field House are secretly being raised as food for demons! Determined to save themselves and the other kids, Emma, Norman and Ray begin planning an escape. But their caretaker, “Mom,” has brought in extra help to keep the orphans in line…

Volume two of The Promised Neverland dedicates itself to formulating the plan to escape the farm. Emma, Ray, and Norman begin training all of the other orphans on how to escape by masking the training as a game of tag. Norman gives them some tips on how to be better taggers but, in reality, it’s all a way for them to mask their trail as they make their escape. Everything is going well in their plan and they even devise a way to get everyone out by forming teams. To do this, they’re going to need more team leaders than just the three of them so they decide to enlist Don and Gilda’s help but Norman has a suspicion that there is someone amongst the orphans that could be a spy leaking information to Isabelle. In order to see if Gilda or Don are the spy, Norman plants false information with both of them, telling them the location of the rope they will use to escape. At the same time, they tell them a pseudo-truth about the house to see if Isabelle learns any conflicting information. The information that Norman gives to Don is that the rope is hidden behind his bed and, sure enough, the rope went missing; however, Don wasn’t the spy!

The rest of the volume begins to refine the escape plan after Norman discovers the true identity of the spy and strikes a deal with them. Emma also discovers something herself. Emma says that the author of the books they have in their library, William Minerva, was putting secret messages into all of his books. In doing so, Emma believes that the key to surviving in the outside world would be to find and locate him. Emma also discovered that Isabelle has a secret room in the house but it’s too dangerous to check it out. Our volume comes to a close when Don pickpockets Isabelle and steals her master key, convincing Gilda to check out the secret room with him.

The cover has the logo of the series in a green colour at the top. Orphans from the series are located in the secret room; from left to right: Ray, Phil, Emma, Norman, Don, and Gilda.

All of the orphans on the cover are standing on a different staircase, looking for books within the secret room.

The library at Grace Field House has a vaulted ceiling, so the walls that continue to the roof are full of books!

I would love to live in a place like that, but I wouldn't want to be shipped out!

Please look forward to the reveal of a hidden room in volume 3. Grace Field House is still full of secrets.

1. The background characters (observing them is always fun—it's interesting how Demizu Sensei adds flair to each one)

2. The numbers on the characters' necks (do they have a system?)

I made a chart of the other characters (only some of them) with their corresponding numbers. (I wonder if they provide a hint of some sort?) 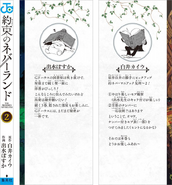 Volume 2 received slightly more negative response as compared to the previous volume. Nevertheless, it still fared well and was praised by critics. Critic Nick Creamer from Anime News Network gave volume 2's art a B, describing Posuka Demizu's art to be "more suited to illustration than comic storytelling.". Creamer gave the story and the overall a higher grade of B+, saying "if it can keep executing that story half as well as it has so far, I'm absolutely along for the ride."[3] Dustin Cabeal from Comic Bastards gave a score of 5/5, for Volume 2 as well as Volumes 1 and 3, describing there are "too many things to compliment about [the series]".[4]

The series as a whole won under the category of "Best Shōnen Manga" in the 63rd Shogakukan Manga Awards, one of Japan's major manga awards. The series was honored with a bronze statuette and a prize of 1 million yen (about US$9,000).[5][6]