Starting Sound (始まりの音, Hajimari no Oto?) is the twelfth volume of The Promised Neverland series.

The illustration depicts Emma standing and looking down curiously on the amulet that Mujika had given to her. Behind Emma is a large city surrounded by a forest.

With the demons of Goldy Pond finally defeated, Emma and the other children now focus on their next task—finding the Seven Walls. But it won’t be easy, especially with a dangerous new foe trying to hunt them down. Can Emma and Ray decrypt the ancient clues that will lead the children to true freedom? 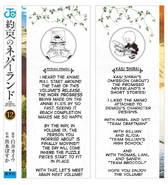 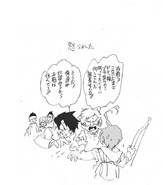 Retrieved from "https://yakusokunoneverland.fandom.com/wiki/Volume_12?oldid=24662"
Community content is available under CC-BY-SA unless otherwise noted.