Emma and her new allies have successfully taken down many of the demons of Goldy Pond. The last one standing in this demonic hunting ground in Leuvis, but he’s the most powerful of them all. None of the children’s tactics seem to work on him, but some unexpected last-minute help may turn the tide of the battle. Can the children of Goldy Pond finally put an end their despair? 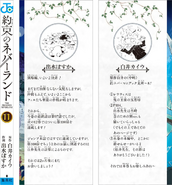