Emma, Norman and Ray are the brightest kids at the Grace Field House orphanage. And under the care of the woman they refer to as “Mom,” all the kids have enjoyed a comfortable life. Good food, clean clothes and the perfect environment to learn—what more could an orphan ask for? One day, though, Emma and Norman uncover the dark truth of the outside world they are forbidden from seeing.

The Promised Neverland (Yakusoku no Neverland) is a story about orphans growing up together in a house and taken care of by a mother named Isabella. They live normal lives, get fed every day, take tests as part of their education, and are allowed outside to play. The only rules are don’t go to the gate and don’t go beyond the fence in the forest as it is for their own protection.

Volume 1 introduces us to our three main characters: Emma, Normal, and Ray. They are the oldest out of everyone at the orphanage and since everyone is placed in a foster home by age 12, being 11, they are due to be placed very soon. However, one of their youngest friends, Conny, was placed before them. Conny always had a stuffed rabbit with her and on the day she was shipped out, she forgot to take it with her. Not wanting her to go to her new home empty-handed, Emma and Norman break the rules and go to the gate in order to give the bunny back to Conny. When they get there, there’s no sign of Conny anywhere. The only thing of interest is a truck that they assume will be bringing Conny to her new home.

Emma gets the idea to leave the bunny in the back of the truck and that’s when they discover the grim reality that is Conny’s corpse with a small plant growing out of it. Norman and Emma take cover as they hear voices and don’t want to get caught. That’s when the ugly truth becomes even uglier when they notice demons wandering about. They learn that they are not living at an orphanage, but rather a farm where they are being cultivated to be food for the demons. They are almost caught but end up escaping, forgetting to take Conny’s bunny back with them. Isabella discovers the bunny and knows that the secret is out.

Emma and Norman begin to formulate a plan to escape. Ray, being suspicious of their actions, follows them one day and forces them to explain everything. Shockingly, Ray accepts everything they say as truth but says it must be them and them alone to escape. Emma doesn’t want that because she can’t stomach seeing anyone else from her family die. It takes some convincing on Norman’s part but Ray agrees to help all 30+ orphans escape. The only deterrent is that Isabella is on the hunt to discover just who discovered the secret. Isabella leaves some clues out in the open to try and judge everyone’s reaction. The biggest clue is that there are tracking devices implanted in everyone so she’ll know exactly where all of her children are at any given time.

Just when Emma, Norman, and Ray think they have the upper hand, Isabella introduces her trump card: Sister Krone. She was brought to the house in order to assist Isabella and become a second set of eyes to watch over the children; however, Krone is not satisfied with her role as an assistant and has plans of her own!

The cover has the logo of the series in a bright yellow colour at the top. Orphans from the series are standing on a staircase; from left to right: Conny, Phil, Norman, Emma, Ray, Gilda, Mark and Don.

Emma appears to be looking at the reader and holding out her hand to them, inviting them into The Promised Neverland.

The illustration is that of a hug between Isabella and the main characters, Emma, Norman and Ray, seemingly before they learn the truth about her and the orphanage.

This is my first weekly series! I'm so excited, flustered and energized everyday! I'm gonna draw and draw!

Thank you for reading! I'll work hard on volume 2 as well.

All my thanks to Shirai Sensei.

1. The foreshadowing in the art (but I'm not telling where)

2. The liveliness of the characters in the background (check out Conny's eyes on page 20, panel 2)

3. The amazing quality of the little kids' drawings on the wall (chapter 3)

Okay, everyone! Please enjoy this series

Profiles of Emma, Norman and Ray

Sketch of a scene between Isabella and Conny

A scene about Krone 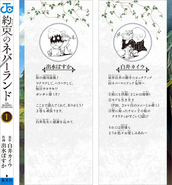 The debut volume of the series has received generally positive reviews from critics. Anime News Network's Rebecca Silverman enjoyed it and said, "Tense pacing, interesting literary connections, art and story work well together, strong plot and foreshadowing.", she gives the art an A-, the story an A, and an overall grade of A-.[3] Dustin Cabeal from Comic Bastards gave a score of 5/5, to Volume 1 as well as Volume 2 and 3, describing there are "too many things to compliment about [the series]".[4] Hey Poor Player's Anthony Pelone gave the volume a 5/5, praising Demizu's art "stunning" and the story to be "Harrowing, but not entirely hopeless".[5]

Volume 1 of The Promised Neverland was one of the 13 nominees of the 10th Manga Taishō Awards[6], an award which helps to promote newly released titles in Japan. In the end, the volume only gained a total of 43 out of 534 points from the "Executive Committee" of the award, and hence achieved the 6th place.[7]
Later in 2018, the series as a whole won under the category of "Best Shōnen Manga" in the 63rd Shogakukan Manga Awards, one of Japan's major manga awards. The series was honored with a bronze statuette and a prize of 1 million yen (about US$9,000).[8][9]

Volume 1 of The Promised Neverland is ranked in the 13th spot among the "Top 10 Graphic Novels for Teens" of the Young Adult Library Services Association (YALSA) in February 2018.[10][11]

The 2018 edition of Takarajimasha's Kono Manga ga Sugoi! guidebook announced its lists of the top manga series for male readers. The Promised Neverland is ranked 1st on the lists, beating other popular titles like Dr. Stone, Demon Slayer and Made in Abyss.[12][13]