Minami Hamabe
Rihito Itagaki
Jyo Kairi
Keiko Kitagawa
Naomi Watanabe
The Promised Neverland is a live-action adaptation of the manga of the same name which was created by Kaiu Shirai and Posuka Demizu. The film is directed by Yūichirō Hirakawa, who is also known for directing films such as the critically acclaimed live-action film ERASED and the live-action Rookie film series. The script is penned by ERASED's scriptwriter Noriko Gotou. The film stars Minami Hamabe as Emma, Rihito Itagaki as Norman and Kairi Jyō as Ray. The Promised Neverland was released on December 18, 2020.

Grace Field House is a paradisaical orphanage filled with happiness. The orphans who live there with their “Mother”, the caretaker, Isabella, all look forward to the day they grow old enough to be adopted. Emma (Minami Hamabe), Ray (Kairi Jyo) and Norman (Rihito Itagaki) also believe they could lead an even happier life once they get to live in the outside world… only until "that day". After Emma and Norman see Conny off, who smilingly leaves the orphanage to be adopted, they find the stuffed toy Conny always kept in her arms left at the dining area of the house. To take the toy back to Conny, the two head to the "gate" which Isabella strictly has taught the children to stay away from, where they find Conny dead and ready to be shipped out as "food". The orphanage which the children thought to be was idyllic, was actually a "farm" to grow edible children to be offered to demons. Furthermore, the "Mother" they had all loved like their actual mother was actually a "cultivator" whose role was to raise the children to be premium feed. Finding out that everything was all but a fantasy, Emma, Ray and Norman begin their reckless attempt to break out of Grace Field House along with their other siblings.

The film was announced on September 26, 2019, with a planned release date in December 2020. It was announced that Yūichirō Hirakawa would direct the film with Noriko Gotou handling the film's script. A broadcast advertising the movie was aired on September 27, 2019 one day following its announcement on Japanese TV network.[1] The official poster and website of the movie are made available so as to market the movie.

Following the movie's announcement, the actress who plays Emma, Minami Hamabe, self-professed herself as a fan of the series, and bought the print volumes and the e-book version of the manga. The actress also praised director Yūichirō Hirakawa and the staff for realizing the world of The Promised Neverland. She vowed to do her best in portraying Emma for everyone who loved the manga.[2][3]

The authors of The Promised Neverland manga, Shirai and Demizu, commented on the upcoming movie, with both of them being generally positive about it. The two have interacted with the staff members behind the movie as well.[4][5]

The film stars Minami Hamabe as Emma, Jyo Kairi as Ray, Rihito Itagaki as Norman, Keiko Kitagawa as Isabella and Naomi Watanabe as Krone. The casting for Krone was met with controversy as the character is depicted being black in the manga and anime, while Watanabe herself is Japanese.[6][7][8] Some things have been changed from the original story, such as the maximum age at which orphans are "shipped" being raised from 12 to 16 and the appearance of Peter Ratri, played by Tori Matsuzaka.[9][10][11]

Production took place in Japan, and the filming occurred in the Important Cultural Property of Japan. The Grace Field House was photographed by adding a set to Tenkyokaku in Inawashiro Town, Fukushima Prefecture, the scenes such as the forest around the house was taken in Nagano Prefecture, Chino, Fujimi and Ina.[12][13][14]

Bryan Tan from Yahoo! Life gave the film a positive review and a 4 out of 5 stars, citing: "The Promised Neverland movie adaptation imitates its manga counterpart with great surgical precision; every twist and turn in the plot was followed religiously by director Yuichiro Hirakawa with very little creative deviation. It is perhaps the most respectful homage one can pay to a series that has succeeded superbly in the manga/anime world, standing in stark contrast to other live-action movies like Bleach or Death Note that have flopped miserably."[23]

Cezary Strusiewicz of Crunchyroll wrote, "In Yuichiro Hirakawa’s The Promised Neverland, hopelessness and resignation are alluring and tempting, and it is heartbreaking watching such young characters seemingly give in to them. At the same time, it also makes it that much sweeter when it turns out that they stood strong and still retained hope. These emotionally packed scenes are also when the actors deliver their hands-down best performances in the movie. Despite some of its flaws, The Promised Neverland is a story about the triumph of hope, which feels exactly like what we need right now. If that sounds like something you would enjoy, definitely check out the live-action The Promised Neverland."[24]

Si Jia of Geek Review gave it a 7.6 out of 10 rating and called it "Despite suffering from some creative missteps, The Promised Neverland is a polished take on an anime live-action adaptation that delivers in the areas that matter."[25]

Jeanmarie Tan of The New Paper praised the film and gave it 4 out of 5, stating: "Aside from exaggerated performances and iffy CGI rendering of the monsters that inhabit their world, this dark fantasy wields a shocking premise that poses provocative questions and provides edge-of-seat twists and thrills."[26] 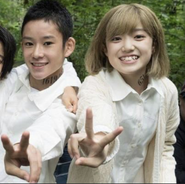