The Promised Neverland Wiki
Register
Don't have an account?
Sign In
Advertisement
in: Humans, Ratri Clan, Villains,
and 2 more

Go wherever you want. Do what you want. You kids win. But remember this one thing. The human world isn't any different. Because... they are a mirror of humanity. Try it if you can. I'm looking forward to seeing how far you can go into the human world.— Peter to Emma in "Prisoners"

Peter Ratri (ピーターラートリー, Pītā Rātorī?) is the main antagonist of The Promised Neverland series. As the 36th and current head of the famous Ratri Clan, he is the overseer of the farm system and the upholder of the Promise between humans and demons. He is also the younger brother of James Ratri as well as the descendant of Julius Ratri.

Peter Ratri was born on September 23, 2016 to the powerful Ratri family on the "Meditation Side" of the Human World.[1] Growing up, Peter was very proud to be a Ratri and he was very close to his older brother, James. But after James began his desire to free the cattle children, Peter was the one who revealed his plans to the higher-ups, who then chose Peter to become the next head of the Ratri family. Peter then executed for being a "traitor" to the family. By 2031, the Ratri family realized there were more people in their clan that supported "Minerva" and betrayed the Ratris. By December of the same year, Peter seemed to have found all the traitors, though James is nowhere to be seen. Nonetheless, Peter kills all the traitors right on the spot. Ever since then, he has been the overseer of the farm system, as well as the one that upholds the system of selling children as food to the Demons.

At some point, the demon royals and five regents and the Ratri family, including Peter, heard of Mujika's clan's ability to give demons a permanent human form and intelligence, thus eliminating the need to rely on eating humans to keep themselves from devolving. They saw this as a threat to the farm system, their money supply, their power over the "demon" world, and above all else, the promise they made. So they massacred the entire clan until only Mujika was left.

Peter is an average-built man with a menacing look on his face. He has straight, long white hair which slightly curls at the tips. Furthermore, he wears his hair in a middle-part. Like most of his Ratri family members, he has green eyes. He is often seen wearing a white suit with a black tie.

Peter takes his role as the preserver of the Promise very seriously, as demonstrated when he had several humans executed for being labeled as traitors. He is also someone who was willing to sacrifice others for the sake of keeping the promise.

He is charismatic and skilled in negotiation, as he was able to persuade the Queen to grant him an army of demons, and shows the true depths of his depravity after learning of the deaths of the Queen and all the other demon nobles; that, instead of taking this opportunity to free humanity, he instead wanted to take control over the demons and maintain the status quo of raising children as livestock but now under his terms and having his clan be the ruling power instead.

He shows himself to be ruthless and sadistic when he tortured Nat and threatened to kill Jemima, while wearing a friendly smile on his face.

The root of Peter's depravity seems to be his obsession with maintaining the original Promise made by his ancestor, as he questioned the children regarding the Promise.

Peter is narcissistic, sadistic, and ruthless, showing no regret for his actions nor sympathy for the children being killed at the farms. He views everyone else around him as inferior to himself. He also views himself as the "father" of the children, and views the children, the Sisters, and even Isabella, whom he had promoted to Grandma, as nothing more than food. Peter is extremely loyal to the Ratri Clan and is willing to kill anyone he views as a "traitor" to the family, including his own brother. His overconfidence stems from his position; when stripped of his power and control, he is fundamentally a coward but is too arrogant to admit he has lost, which leads to him lashing out like a cornered animal out of rage, fear, hubris, and desperation.

Instead of being shipped out from Grace Field House, Norman was introduced to Peter by Isabella as Norman's new foster father, though Ratri had Norman address him by his name instead. Ratri asked Norman to help him with his research at Λ7214, to which the boy agreed. In the subsequent months, Norman lived in Λ7214 as Peter kept track of his progress.[2]

After unknown events, Norman destroyed the Lamba facility and escaped it, taking all of the experimented children with him. However, many secret Minerva supporters at the facility were unable to escape, as Peter had ordered a purge to wipe out the supporters lurking behind the scenes.[3]

Once Legravalima and the Five Regent Families are killed, Peter sends the demon army to the Paradise Hideout hideout in order to prevent the children from enacting their promise. In the process, he kidnaps all the inhabitants and transfers them all to Grace Field House to be processed as food.[4][5]

The two of them originally had a brotherly bond. Peter even agreed with James his way of thinking for a while because he thought that it was better. This seemed to be a facade when Peter revealed that he was just pretending to agree with James' plans. Peter even went as far to take James his title of the 35th head of the family and claim it himself. He then ordered his underlings and the rest of his clans to kill his own brother, implying the hostility between the two. 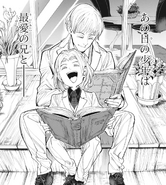 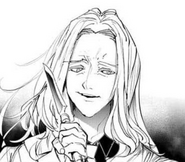 Peter getting ready to kill himself