Nat (ナット, Natto?) is a 9-year-old orphan who formerly resided in the Grace Field House. He is a fun-loving and slightly narcissistic boy who is brought into the escape plan alongside Anna, Thoma and Lannion after the truth of the orphanage is revealed.

After his success of escaping Grace Field alongside the 14 other orphans, Nat now seeks to find William Minerva, whom he and his team believe can grant them the liberty to live a safe and peaceful life away from the demons.

Nat is a young boy of average height with brown eyes and a tall nose line (which he takes great pride in). He has short, neatly-kept red hair styled into a bowl cut and bangs which mainly drapes over the right side of his face. He wears the standard orphanage uniform- a white shirt and trousers along with brown, plain shoes. Like all other orphans at Grace Field House, he has a number tattooed onto the left side of his neck, in his case, the number "30294".

In 2047, Nat stopped wearing the standard uniform when he arrived at the shelter where he found new clothes. He began wearing long, black pants, a black shirt, and a long, white-colored coat together with the old brown shoes he wore at the Grace Field House. Now at the age of 11, Nat has grown significantly taller, being slightly taller than Anna. He also has longer and messier hair.

Nat appears to be a rather jovial, carefree and fun-loving child. Being an extrovert, he is often seen mingling with the rest of the orphans. He is prideful of his nose line and took Mister's insult of it as a compliment. Nat seems to be easily intimidated, this was shown whenever he sees malicious-looking people or creatures, such as Sonju.

Nat is a person who wears his emotions on his sleeve, and as so, he is not afraid to express his feelings. When he is overjoyed or sees his siblings being well after being injured, Nat is seen crying tears of joy. When he feels uncomfortable by something, he clearly shows it on his face.

Nat is also shown to be creative, musical and observant.[6] While he can easily get discouraged sometimes, he is hardworking and puts in a great effort in living a good life. Although he is often seen in a happy mood with a rather jolly attitude, Nat will turn serious when needed, especially when it revolves around his siblings.

Nat was first seen playing tag with his siblings of the Grace Field House, where he was almost immediately caught by Norman. A few days later, during a game of tag, he was caught by Krone along with Anna, Lani, and Thoma.

It is revealed that Nat, along with Anna, Thoma, and Lani was brought into the escape plan after Don and Gilda. Nat was seen being horrified when Isabella carried Emma with a broken leg, to which he understood that it was Isabella's doing. During the two months after Norman's shipment, Nat and his siblings got instructions from Emma on how to train the orphans for the upcoming escape. Nat also assisted Don to secure the zip lines in order to cross the cliff, and on January 15, 2046, Nat and his siblings escape from Grace Field House.

Nat was seen among the children searching for a way out of the demon forest. He reached just like the rest of the children Shelter B06-32 and took refuge in it for more than a year.

Upon arriving at the Paradise Hideout, Nat was overjoyed and content to finally have a real toilet. He was also shocked and happy to see Norman again. Nat was later seen with the rest of the children listening to Emma's and Ray's speech about leaving the Paradise Hideout to go to the seven walls to try to make a better promise. He then waved Emma goodbye like the rest of the children.[7]

Upon arriving in the Human World, Nat is seen to be visibly worried and shocked about Emma's disappearance. Nat, along with the other children, agrees to search for Emma so they can reunite with her again.[8] Over the two years spent in the Human World, Nat began attending school and studying intensively, presumably about music. During spring 2050, he finally reunites with Emma again.[9]

Nat is close with all of the Grace Field Escapees, especially Ray, Don, Anna, Thoma, Lani and some of the younger kids. He loves them all and is protective of them. He is always ready to join his whole family in adventures and playing with them.

Anna has been friends and a sisterly figure for Nat throughout their lives in Grace Field House. Anna cares for Nat just like how she cares for everyone who crosses her path. Alongside Nigel, Thoma, Lani and a few others, Nat appeared to be one of the few people who have a crush, or at least a slight interest, on Anna. This was shown when Nat stared at her when she was preparing to enter a demon territory with Emma, Ray and Hayato, with a heart shape beside him as the girl tied her hair, though Nat immediately denied Hayato when he said how he and the others liked her.[10] 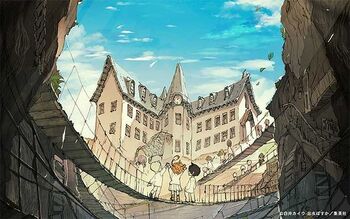 Retrieved from "https://yakusokunoneverland.fandom.com/wiki/Nat?oldid=25582"
Community content is available under CC-BY-SA unless otherwise noted.