The Promised Neverland Wiki
Register
Don't have an account?
Sign In
Advertisement
in: Humans, Grand Valley Orphans, Female,
and 2 more

Monica (モニカ, Monika?) was an orphan from the Grand Valley orphanage who was later transferred to Goldy Pond as a part of the Poachers' hunting game. She, along with her brother Jake, were killed by Leuvis in one of the hunts.

Monica was born and raised at Grand Valley orphanage, growing up along with several other children. At some point, she was shipped out and sent to Goldy Pond to become prey for the Poachers to hunt along with her brothers Jake and Theo.

Monica is a young girl around the same age as Emma. She wears seemingly filthy high-collar long sleeved shirt with black leggings underneath a white skirt and a pair of boots. Her hair is tied neatly into a ponytail. Her Grand Valley identification number is tattooed across her upper chest.

Out of the three, Monica appeared to be the bravest and most courageous in the group, as she did not hesitate to save Theo from the poachers, despite knowing the chances of beating them are slim.

Monica, Jake and Theo were first introduced in Goldy Pond, in which they had their first encounter with the Poachers. Monica managed to damage one of the attendants, but was still surrounded by the monsters. However, Emma swung an axe at one of the Poachers and told the orphans to run.[1]

After reaching safer grounds, Monica and the others briefly introduced themselves to Emma. They were told to tell the monsters to come after her if they were to be killed, and then they split up, with Monica, Jake and Theo heading downwind of where they were.[2]

Leuvis expected the children to head downwind and tried to kill Theo, but this time Jake protected him and got himself killed in the process. Theo and Monica fled the scene, but Leuvis caught up soon and killed her on the spot, leaving Theo devastated.

When Monica tries to defend herself and Theo, she used a spear to fight against the poachers.

Monica was known to be very close to her siblings ever since their time they had spent in the orphanage they were once in. The trio was seen together even during desperate measures during the poachers' hunt, showing how attached she was to Jake and Theo. She was shocked to see Jake die for the sake of her and Theo and told Theo to run for his life but not soon after she was murdered as well. 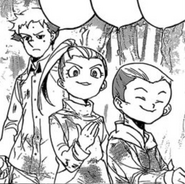 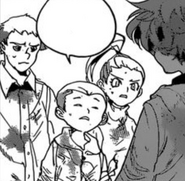 Jake, Monica, and Theo with Emma.