Michelle (ミシェル, Misheru?) is a minor character of The Promised Neverland and a recurring character from the A Letter from Norman light novel.

She was a 12-year-old orphan who resided at Grace Field House Plant 3 under the parental care of Isabella. Being two years older than Norman, Emma and Ray,[3] Michelle acted as the three's older sister figure and helped them and cared for them on numerous occasions. Michelle was also close friends with Olivia, another girl who was the same age as her.

Michelle was born at Grace Field on February 2, 2032 and sent to Plantation 3 a year later in 2033, growing up along with several other children under the parental care of Isabella. Sometime in the winter of 2039, when Norman fainted and got sick when he was playing with Emma and Ray out in the cold, open air, Emma was caught sneaking into the infirmary to visit Norman. Emma was then tied to a chair by Isabella. Michelle advised Emma to listen to Isabella's advice to let Norman rest. However, after Emma frantically explained how Norman might be lonely without anyone's company, Michelle decided to pay a visit to Norman together with the other orphans. Michelle, along with her best friend, Olivia, begged for Isabella's permission to enter the infirmary to see Norman but to no avail. In the end, while standing outside the infirmary, Michelle and the others happily watched Emma talking to Norman over a tin can telephone.[4] Michelle was shipped out of Grace Field on her 12th birthday on February 2, 2044. She was killed and fed to the demons, presumably those of high-ranking in the Imperial Capital.[5] Michelle was the child shipped before Olivia.

Michelle was a fair-skinned young girl. At the age of 7, she had long, curly hair which was tied to the back of her head with long bangs that reached to her chin hanging at the left side of her head. She wore the standard Grace Field uniform- a plain white long sleeved button-up shirt and a white skirt along with brown boots.

Michelle was a caring and kind-hearted girl and treated her younger siblings dearly, evident when she begged for Isabella's permission to visit a sickly Norman in Grace Field's medical room. The latter also appeared to be quite studious, as she studied with her close friend, Olivia, to prepare for the tests.[citation needed]

This Manga spoiler has not been adapted into the Anime yet. The solid lines mark the beginning and end of the spoiler.

When Queen Legravalima ate all the dead demons around her surroundings, garnering a new form consisting of faces of all the demons she ate, as well as Krone and all the orphans from premium farms they consumed in the past. Michelle's face was seen among them, confirming how the girl had indeed died and was eaten by one of the high-ranking demons in the Royal Capital.[6]

Michelle and Olivia in the omake.

Michelle and others happily watched Emma talking to Norman over a tin can telephone.

Michelle alongside Olivia in Chapter 17.

A very small appearance of Michelle and Olivia in Chapter 32. 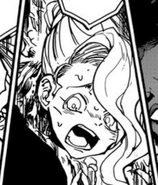 Michelle seen among those consumed by Legravalima and other demons.

Michelle, Olivia, and Marcus seen among those consumed by Legravalima and other demons. 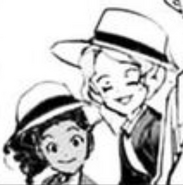 Michelle and Olivia re-imagined by Emma as she mourns loved ones she's lost. 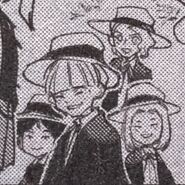 A small flashback of Michelle, Hao, Sadie, and Marcus in chapter 177.

Michelle seen walking to Grace Field's cafeteria with a young Emma and others in the season 1 ending theme song.

Michelle seen playing ball in the field with Olivia, Robert, and others in the season 1 ending theme song.