This article is a stub. You can help The Promised Neverland Wiki by expanding it.

Hayato is an average height boy with blond-colored spiked hair and green eyes. In his first appearance, he's seen wearing a white headband, a black long-sleeved shirt under a light-colored vest,gloves and a black mask.

Hayato was rescued by "Minerva" along with hundreds of other children. He has a great deal of respect for "Minerva", even comparing him to a god.[1]

Despite being physically weaker than his allies, Hayato has super speed and can run in such manners that no normal human can. This is revealed to be something he got from being experimented in Λ7214.[2] 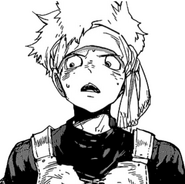 Retrieved from "https://yakusokunoneverland.fandom.com/wiki/Hayato?oldid=25145"
Community content is available under CC-BY-SA unless otherwise noted.