The Factory Farms are farms that mass produce cheap orphan meat of poor quality. As mentioned by Sonju, there are hundreds of such farms as compared to the mere number of Premium Farms, which are polar opposites of factory farms in terms of the quality of orphan meat they produce.[2]

One of the factory farms "William Minerva" and his team raided resembles that of a normal factory. Two of "Minerva"'s teammates described how the factory farm's exterior is clean-looking, whilst the interior, specifically the room which keeps the orphans, emits a bad odor, even from a distace.[3]

According to the archives in Shelter B06-32, the factory farms simply used brands instead of farm identifiers to mark the orphans. The brands would be engraved onto a certain part of a factory farm orphan's body, such as on the collar bone, the back of a hand, on the head or on the upper part of an arm.[4]

Orphans at the Factory Farm

The children in these farms don't learn languages, have names, have free will, and cannot think of escaping because they are kept in a comatose state their whole lives. The factory farms are also well-guarded against the Poachers who try to steal the children from the plantations. 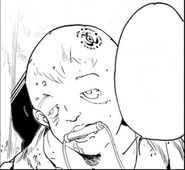 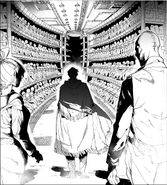 Retrieved from "https://yakusokunoneverland.fandom.com/wiki/Factory_Farms?oldid=24581"
Community content is available under CC-BY-SA unless otherwise noted.