Isabella sounds the alarm that the children have escaped. The demons are on high alert, and cover the one only exit, the bridge. Thankfully, this has been planned for. Instead of going the obvious route, the children get ready to cross the gorge. Isabella realizes their plan and begins to track them down.

As the kids begin their ascent up the wall, Emma informs Ray of a change in her plans: rather than rescue everyone tonight, she’s leaving all the little ones four and under behind, and is committed to coming back for them, and everyone else in the other plants, before their various shipping dates, arrive. It’s a tough choice, but one that had to be made to ensure that the group of fifteen older kids survive the escape.

That’s why little Phil is with Mama as the house burns: turns out Phil is in on it, and even though he’s only four, he now understands what it means that Norman, Conny and the others were “harvested.” Emma leaves him in charge of training the next “wave”, his fellow younger kids, and getting him ready for when she returns.

But first things first, getting across that great yawning cliff. There’s another wrinkle in the plan for which Ray was kept in the dark, which meant Mama was kept in the dark: they don’t use the very obvious bridge to cross the cliff. Instead, Don heaves a stone across a narrower portion of the cliff, and the rope wraps successfully across a tree. He ziplines across, secures the other end of the rope, and secures the second and third ropes two of the kids use water rockets to launch across.

It’s a wonderful use of ingenuity and intense training, and the kids pull it off with aplomb. Phil also succeeds in distracting Mama just long enough so when she sounds the alarm the monsters go to the bridge, and when she realizes they’re not at the bridge, she doesn’t get to their location until Emma is the last person who hasn’t made the crossing. Emma flashes one last defiant look at her former Mama and says goodbye before ziplining across. The lines are cut; Mama is beaten.

In her moment of defeat, we learn more about who Mama — who Isabella — was, thanks to a supremely affecting flashback that really humanizes her despite the monstrous things she’s done for her superiors. Isabella had a “Norman” of her own in Leslie, who played a beautiful lute and wrote a nameless song she loved. But Leslie’s shipping date came, and he said goodbye, and Isabella was devastated. She used her ingenuity and athleticism to climb the wall, only to find the cliff and despair as Norman must have done when he first saw it. Her Mama comes to bring her back home, and eventually, Isabella is given the same offer she’d later give Emma.

Only while Emma refused, Isabella accepted. She was trained to be a Sister, then a Mama, and even gave birth… to Ray. A younger Ray hums the same nameless song Leslie used to play, because Isabella hummed it when he was in the womb. Ray realizes Mama is his birth mother, asks why she gave birth to him (survival, plain and simple), and their “collaboration” continued from there.

Isabella held close and never forgot from her time as one of the same kind of kids Ray, Norman and Emma turned out to be, but it’s a song that reminds her that she chose to survive by joining the system rather than rebelling. In the end, Mama seems more proud than anything else that her beloved children outwitted her. Now that they’re beyond the wall and cliff, she wishes them good fortune.

The sun rises out of the horizon for the first time since they gained their hard-earned freedom. Seeing them silhouetted against the dawn’s light is one hell of a beautiful parting shot.

Phil starts to cry as Emma consoles him.

Isabella reunites with the younger orphans.

A flashback of Norman overlooking the bridge.

A flashback of Don and the others training for the escape.

Jemima after crossing the cliff with Ray.

Isabella caught up with Emma.

Leslie about to depart with his Mama. 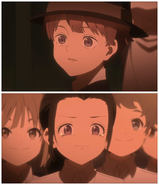 Sarah signally Isabella to get down.

The Grandmother before Sarah. 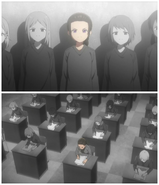 Isabella during her training days.

"Why did you give birth to me?"

Isabella, with her hair down, as she looked to where her children escaped.

Isabella went back to take care of the remaining children.

The escapees meet their first sunrise in the outside world.