The Promised Neverland Wiki
Register
Don't have an account?
Sign In
Advertisement
in: Humans, Female, Glory Bell Orphans,
and 5 more

Dina (ダイナ, Daina?) is a minor character of The Promised Neverland manga series. She was an escapee from Glory Bell, and a childhood friend of Yugo and Lucas. She was killed by Leuvis when she and her friends ventured into Goldy Pond.

Dina was born and raised at Glory Bell orphanage, alongside Lucas, Yugo, and countless other children. She enjoyed having tea parties and had an empathetic personality. She was also Yugo’s childhood crush. At some point during her time in the orphanage, Yugo brought forward the idea of escaping (presumably after finding out the true intentions of the farms). From there, Dina escaped with Yugo and Lucas and sixteen other children. Dina and her friends then took refuge at Shelter B06-32 before deciding to travel to the human reserve in hopes of finding William Minerva. On the way there, Dina and her friends were captured by the Poachers who brought them to Goldy Pond. Once there, Leuvis mercilessly slaughtered her and all of her friends with the exception of Yugo, who later returned to the Shelter alone, and Lucas, who begun living in the windmill with another boy, after barely managing to escape alive.

As Yugo died in the explosion, he woke up in the afterlife, surrounded by all the friends he had once lost. Dina walked up to him and hugged him warmly while Mister apologized for not being able to see her quicker in the afterlife. Dina interrupted him and denied what he said. Dina continued to hug Mister as the latter cried in her arms.

Dina sports a dark headband to go along with her light hair and long bangs. In all clothing she's seen wearing, she normally wears the uniform all farm children wear, even into her teenage years; a button-up white shirt with a white pleated skirt to go along with

Not much is known about Dina, but it can be assumed she's very empathetic, as upon meeting Mister again in the afterlife, she greets him with kind words and open arms. 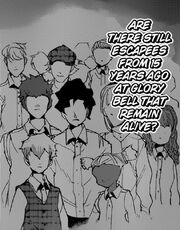 Not much is known about their relationship, but it's assumed they were very close in childhood up until her death at Goldy Pond. Mister is hinted at having a small crush on her when they were children, staring at her longingly until Lucas teases him supposedly. At Goldy Pond, Mister is seen holding Dina as she dies or struggles to stay alive after receiving heavy wounds.

Not much is known about Lucas and Dina's relationship as children, but it is assumed they were close as children; with Lucas being a close friend of Mister's, it can be assumed Dina and Lucas have most likely interacted once or twice in the past due to their shared friendship with Mister