A Letter from Norman

This species of unknown classification, called Demons by the children, Man-Eaters by Mister, Monsters by the Goldy Pond Resistance and simply referred to as Them by Sister Krone, is comprised of tall humanoids with monstrous appearances and appear as the main antagonists in the cattle children's eyes. They are the beings that command the "Demon World" in Factory Farming and Premium Farms.

In the past, the demons have even been referred to as devils and gods. It is currently unknown how the "demons" got to Earth or if they were native to Earth at all. Anything after the year 2015, which is stated by Ray to be the last year of any updated book at the Grace Field House.[1] Norman theorizes that they originally resembled bacteria, and began to eat and take on the traits of animals and eventually humans.[2]

According to Sonju, as the "demons" preyed on ancient humans, some of the humans began to fight back. After countless deaths and wars, a promise was formed between the "demons" and the Ratri Clan. The human and demon realms were split in two, where neither was allowed to cross nor hunt each other. The Ratri Clan left an unknown amount of humans in the demon realm, stranded with no way to escape, to become livestock for the demons in order to maintain peace in the human world. Thus the plantation system was formed via a loophole, as the demons were not hunting them.

There are five known varieties of demons that bear different and unique appearances to distinguish each of them from one another. Below is a list of demons according to their race or class.

Farm Demons are all tall beings that have long, pointy faces with two eyes above each other and two horns on top. They have a mouth with sharp canines and a long tongue. They have long arms, six fingers, and sharp nails. They each have four limbs and walk on two legs.

Some demons have been seen with a pipe connected to their masks. It is currently unknown what purpose this is for, if it serves any purpose at all. All demons so far have also been seen wearing a black cape.

Tamed demons appear to be demons which bear the most resemblance to the man-eaters (with the exception of having four legs instead of six legs).

Heathens appeared to have the most human-like looks compared to the other types of demons— they each have four limbs and walk on two legs. The heathens are also the only group of demons to have horns on their heads.

Just like the farm demons and poachers, the heathens are polydactyly-like, with six fingers on each hand and wear masks with holes for them to see through.

Heathens are specifically known for their religious beliefs of not eating humans, but that does not restrain them for doing so in the future, as a heathen, Sonju, bears the desire to prey on humans again in future.

Poachers appear to be the wealthiest kind of demons. They look and behave the same as Heathens, with the exception of wearing more prestigious attire. These demons also wear masks to protect their middle eye from any harm. Poachers appear to have 3 long fingers on each hand, have tall slender bodies and quick reflexes. They also seem to be really fast, showing this with their exceptional abilities and skills.

These demons buy or steal humans from the premium farms and hunt them in the secret reserve Goldy Pond. Aristocrat Bayon hunts for fun while Grand Duke Leuvis hunts for excitement. The demons eat human meat after each hunt, with the meat nicely chopped into pieces shaped like steak.[3]

Being the least human-like than their other counterparts, the man-eaters crawl on six legs and have numerous eyes, and are completely unclothed. They also appear to be the largest of the species. A wild demon can be killed quite easily if a human is an experienced demon killer like Emma, Ray and Mister, for example, making man-eaters weaker then their tamed counterparts.

Language: Besides being able to speak the human language, the demons sometimes tend to communicate in their own native language.

Ear-piercing Scream: A wild demon can let out an ear-piercing scream to signal to its surrounding allies.

Invulnerability: Wild demons are also shown to be rather invulnerable to physical attacks unless they are aimed at their eyes, which is considered their weak spot. Similarly, during the fight, Emma, Ray, Nigel and Violet had with Leuvis, the team successfully shot and broke Leuvis' mask, but the demon himself remained unhurt.

Regeneration: Demons can heal any kind of (their) wounds, except their middle eye.

Assimilation: Demons can be consumed by other demons, resulting in the two minds of the demons merging and acting like one.[4]

Enhanced Speed & Reflexes: Wild demons are shown to be physically adept (and possibly more so than their civilized counterparts) as they are capable of running, pouncing onto their prey, and climbing up trees at great speed.

Evolution: Demons are capable of rapidly evolving by obtaining the characteristics of whatever they consume, which is how many have gained sapience.[5]

Evil Blood: Demons who retains the characteristics and sapience of humans without requiring to consume them. Other demons who ingest a drop of their blood gain the same abilities and are also able to spread this unique body composition to other demons.Only Mujika, Leuwis, Sonju and all Five regent Families such legravamalia have this ability. This is unique ability originally only Mujika have while others demons gain it by ingesting Mujika blood or by ingesting others demons who have ingest Mujika blood.

Cores: This is unique ability only Leuwis and Legravamilia have which allow them to have two cores meaning that once their first core is broken, their second core takes over, which is the resurrected one. This is extremely rare, and Legravalima is thought to be the first one in years to inherit this ability; not even her brothers had this trait. But Leuwis is later reveal to also have two cores.

Middle Eye: This is demons' only known lethal vulnerability. The anthropomorphic demons always wear protective masks that largely conceal their faces with the exception of an eyehole on their mask's top and bottom, respectively. However, their mask protectively hides their middle eye because once this eye is destroyed the demon dies. Though they are exceptions as Legravamia and Leuwis are only two demons so far capable surviving having their middle eye destroy.

Devolution: Demons must continue to eat in order to retain their characteristics. As a result of consuming low-quality factory farm meat for 1000 years, the ability has deteriorated for inferior demons, and even a period of six months could cause them to lose intelligence and return to the wild.[6] Demons can lose this weakness by ingesting the blood of Mujika or someone else who has done so.[7]

Vision: Despite being able to quickly regenerate most other parts of their body, Leuvis states that demons' ocular nerves are highly sensitive and difficult to regenerate. Because of this, if a demon's eyes are damaged, such as with a flash bomb, they take a very long time to recover their vision.[8]

While they largely consume humans from Premium Farms and Factory Farms, they apparently eat other foods like chicken, sausage, grapes, apples, bread, wine, and cats.[9]

The Demons offer the premium-grade quality food to

It is later revealed that Demons eat humans not simply because they enjoy it, but because they need to. Demons take on the characteristics of whatever they eat, which is why they vary in appearance, size, intelligence, and abilities (i.e., reasoning and thinking).  This explains why some are more like predatory animals, and others are sentient humanoids. If a Demon goes too long without eating humans, it gradually loses its humanlike sentience as well as reassuming more animalistic forms. 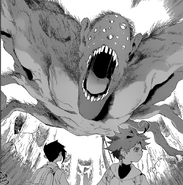 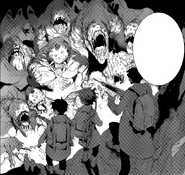 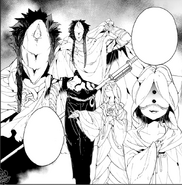 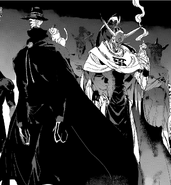 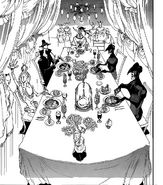 Poachers eating after a hunt
Add a photo to this gallery

Retrieved from "https://yakusokunoneverland.fandom.com/wiki/Demons?oldid=24775"
Community content is available under CC-BY-SA unless otherwise noted.