Emma and Ray encounter their first wild man-eating demons while the Mister teaches them about the forest and its inhabitants.

As the trio enter the forest in search of Goldy Pond, Emma and Ray observe the surroundings. The Mister then explained about the wild, man-eating demons that post potential danger towards them as he describes the characteristics of such demons, making the two cower in terror.

As the group proceeds to look for the pond, Emma tries to learn the skills of hunting by watching and imitating the unnamed man's moves, much to the latter's dismay as he thought of the slimming possibility of fooling them. Out of a sudden, he fires his rifle and alerted a demon (in hopes of getting rid of either Emma or Ray), as the demon pounced from above to attack Emma. 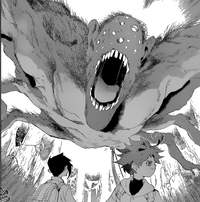 Noticing the demon, Emma froze in fear, defenseless, as Ray grabbed her by her collar and dodged from the demon in the nick of time. An unconscious Ray then fell onto the ground as Emma immediately got back to her senses. She grabbed hold of her rifle and attempts to save Ray from the demon but before she could pull the trigger of her rifle, the man — standing on the branch of a tree - shoots the demon through its head, saving the three of them from getting eaten.

John shooting the demon
The entire moment of being attacked by the demon left Emma in a traumatized state, as she questioned Ray whether or not she's alive as the latter proceeds to check on her. The two are later greeted by the amused man as he climbs down from the tree and mocks the two's inability to protect themselves from the demon. In spite of the man's mockery, Emma thanks him for saving her. 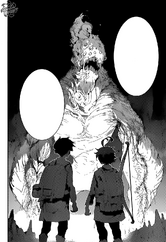 As Emma and Ray assume the demon is dead but the man corrects them, explaining how the demon is invulnerable to his attack. 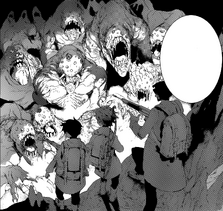 The shot demon later rises from the ground as it lets out a scream to signal its surrounding allies. As the trio stand atop of a tree, surrounded by a pack of demons, the man expresses how their lives are in the hands of his and challenged the two to see who will survive in the end.

In this chapter we have the following Research Elements:

Retrieved from "https://yakusokunoneverland.fandom.com/wiki/Chapter_61?oldid=19367"
Community content is available under CC-BY-SA unless otherwise noted.