My Burden (背負うべきもの, Seoubeki Mono?) is the one hundred twenty-ninth chapter of The Promised Neverland Manga.

It is revealed that Norman have been experimenting with demons after they destroyed Λ7214.

Norman and Zazie went down a passage and entered a room with a huge demon chained and impaled. He comments that it's a been a while since he came to this place. Cislo reveals that he comes here often because it puts him in a good mood.

Norman then revealed his talk with Emma and Ray. He then said Emma doesn't want to kill them and Barbara explodes and questions why.

She goes on and says that the demons aren't like that. While she says that, she recalls her past in Goodwill Ridge, Cislo and her being shipped out, and the experiments.

She grabs her head and alerts them that it's happening. She is having a painful headache. Vincent says that the "fits" have been happening way more often. He then gives his medicine to her and she eats it. He further informs them that the condition itself is worsening and they have less time than they thought.

Cislo then questioned if Norman is still on their side, that he's not regretting anything.

While surrounded with demon parts in glass jars, Norman says that after all he's done. He can't go back anymore.

February 2047. After destroying Lambda, Norman looks around and recovers all the data from it. He said that the data for demons is not enough. How do they transform? How do they regenerate? Evolve? and Die? All of these questions swarm his head.

He then looks at the demons says that they will need more data on the demons. After that, they conducted many experiments resulting in many demon's body parts in glass jars to be preserved and studied on.

As he leaves the room, he says that he has no regrets. Whatever he started, he should be the one who finishes it. These are the burdens that he alone must take.

To save all human beings, Norman would gladly make himself God or a Devil.

Grand Valley as shown in Barbara's flashback in the first panel is covered by a large, transparent cover. 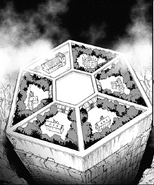 In the Jailbreak Arc, Grand Valley, as well as the other Premium Farms, are exposed to the sky.
Add a photo to this gallery

Retrieved from "https://yakusokunoneverland.fandom.com/wiki/Chapter_129?oldid=20078"
Community content is available under CC-BY-SA unless otherwise noted.