Awla (アウラ, Aura?) is a minor character of The Promised Neverland. She is an orphaned demon child who lives in the Imperial Capital.

Awla is a demon child with the typical demon features of horns and a mask, along with her individual features of dark skin and intricately tied back hair.

Awla was seen to be very worried about the safety of her parents, and expressed great sadness about their deaths. She also respects her saviors, Mujika and Sonju, referring to them as "older sister" respectively "older brother", and finds it illogical for them to be executed when they have saved many people.

After Norman and his group poisoned the entire demon capital, Awla and Mawla's parents became wild demons. However, they were saved by Mujika and were given her blood, and ultimately reverts back to their normal forms. Additionally, Awla and Mawla receive a dosage of blood as well, so they never have to degenerate in the future.[1]

After the death of the Demon Queen, Legravalima, chaos ensued in the capital. Two unnamed soldiers dragged Awla and Mawla away from their parents while the Ratri clan was trying to collect all the demons who had ingested Mujika's "evil" blood. The two sisters struggled, but were told that it was in their best interest to stay quiet and stop struggling in order to avoid capture.

Later, while the two demon soldiers were discussing suspicions about the Royal Family, Aristocrats, and Ratri Clan, they are interrupted by a sobbing Awla and Mawla begging them to save their parents and the "big brother and big sister" who saved them. The soldiers tell them that there is nothing they can do but protect the two children. Meanwhile, their parents are executed.[2] 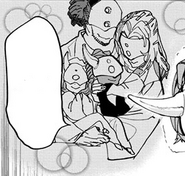 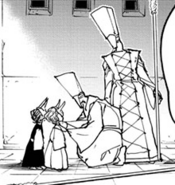 Awla and Mawla being comforted by the soldiers who rescued them.