What's on your mind?

It autocorrects it to meat 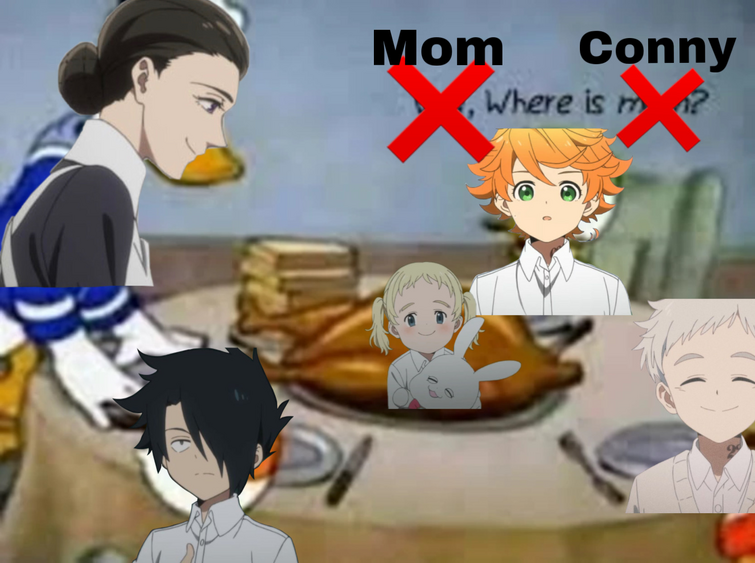 I watched every single episode (after season 1, I had to switch from Netflix to Hulu). A lot of the post-breakout events on this wiki are things that were not in any of the episodes.

How's it going, everyone? 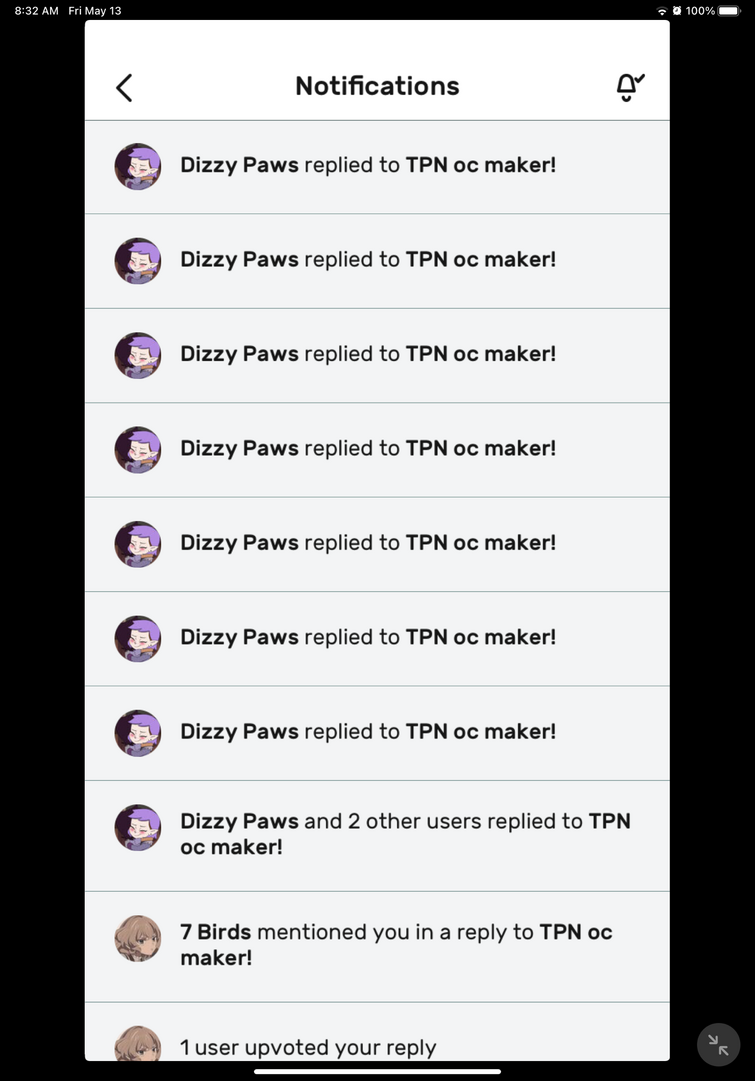 Hello. I am Phooy! Sometimes spelled Phooey or Phooiey. I am somewhat inactive, fan of TPN, I like Ray. I am here really just to vibe and see opinions on TPN stuff. She/They pronouns fyi

Once you finish, write in the comments 'done!' and wait till I send you your OC's details!

Soooo I was thinking of making an Emma Ratri AU, but when I posted it on a fanfiction site people turned it into something really dirty and started calling me bad words/stuff I’m not, so since the people there are so toxic I had to delete my story. I literally only just wrote the first chapter. 😢💔

Hopefully the people here aren’t as toxic so I’m going to post it here and hope for the best…this is an ongoing story so I will update it time to time.

Emma Ratri sighed, pulling yet another textbook off the shelf. She unenthusiastically flipped through the pages before slamming it shut.

It was yet another boring day of staying cooped up in her room all day doing nothing. As much as the girl loved her father, he was extremely overprotective. Emma was only allowed to go to Peter's office, which was the room next to hers. It annoyed Emma that she could never explore the rest of the hospital. Of course Emma had learned about hospitals through books, but it just wasn't the same. She wanted to see the patients getting better. She wanted to cheer them up, or even make a friend.

A friend. Emma thought dreamily. Emma would love to have a friend. She knew some of the people who worked at Lambda really well, and she often talked to her father when he was available, but she'd never had a friend her age. A friend whom she could relate to.

No. Emma wasn't going to let another day go to waste.

The young girl grinned, staring at herself in her dresser mirror. She was petite with bright green eyes and ginger hair. She wore a white suit with a plaid skirt and black leggings. She smoothed out her hair, then confidently walked out the door, barging into Peter's office.

"Father!" She exclaimed, "Good morning! Well, more like afternoon but—"

Peter sighed, "Emma. Oh Emma, how many times must I tell you to not disturb me during work?"

"Sorry." Emma muttered an apology. She'd forgot to check the time and had arrived before Peter the usual time period where Peter took a break.

He sighed, putting away some files. "Why are you here?"

"I…I wanted to ask if I could see some of the other patients. I could be of use to you guys! I could read them stories, or get them toys, or— ooh! I could bring them food, I could—"

"Emma. Look." Peter Ratri told her, "You're a kindhearted girl but you know I can't let you do that."

"But you could have me work alongside one of the doctors! I'd get a real life experience of what it's like! Didn't you say I was going to work here when I grow up?"

"Well…yes, Emma, but obviously that means you won't be able to work here until you're an adult." Peter said.

Emma pouted, "But Dad! I'm very mature! I could handle it!" She tugged at his shirt.

"You are to address me as Father." Peter pushed her off gently, "The people in Lambda are very, very ill, Emma." He continued, "They suffer from hallucinations. They see things that aren't actually there. And they get angry at me because of it. Angry at us— simply because we're trying to help them. They can hurt you, Emma. They're very sick, unfortunate souls that desperately need rehabilitation. Doctors can't do their job and heal patients with a child frolicking around. You'll end up doing more harm than good."

"Go back to your room, Emma." Peter said sternly.

"Fine." Emma agreed reluctantly, practically dragging her body into the hallway. Peter watched her go into her room and shut the door.

30 minutes later after Emma was sure her father wasn't watching anymore, she shoved a couple giraffe plushies under the covers, turned off the lights, turned on her nightlight, then creeped into the hallway. She ducked behind a corner, deciding to go right since she noticed a camera located on the ceiling left of the hallway. The further she went, the colder it seemed to get. A shiver ran down her spine as she looked around the unfamiliar place, writing down the path she took on a small sheet of paper so she wouldn't get lost. She ducked into the nearest room to avoid being spotted after seeing a doctor.

Emma whipped around, noticing she wasn't the only person in the room. A boy stood near the sink, holding a bloodstained paper-towel up to his mouth.

"Gah! You scared me! I thought that you were one of the adults."

The boy finally made eye contact with her after dabbing his mouth with the paper-towel one last time. He had blue eyes that were a piercing blue color, but what surprised Emma most was his pure white hair.

Emma had never seen anyone like him. "Your hair! It's white! But…you don't look any older than me!"

"I'm not. I'm albino." When Emma stared blankly at him, he explained, "Basically my body doesn't produce enough melanin so it affects my hair color, among other things."

"I think your hair is super unique! I can't even get mine to stay straight."

"Mhhm." Norman didn't seem very interested in the conversation, eyeing the door closely as if it were much more important than Emma.

Emma looked behind at the door. Nothing was there.

"Nothing, it's just…shouldn't one of the guards have picked you up by now? I thought we were only allowed allotted time, and the guards make sure we go one at a time. Also, erm, this is the boy's bathroom." He gestured towards a urinal.

Realizing how awkward this must be, Emma's face turned red, "I— um—"

"You're not supposed to be here, are you?" The boy leaned against a wall.

Emma forced a smile, "No, what makes you say that?"

"For starters, your choice of wording at the beginning of this encounter was very particular: you mentioned being caught by an adult, which implies that you ran away. You look nervous right now, and you immediately denied what I just said."

"You won't tell anyone, right?"

The boy gave her a quizzical look. "Of course not. Why would I purposely get someone in trouble, especially here?"

The way he said "here" with such disgust surprised Emma. She didn't understand why none of the patients would like Lambda. After all, her father was only trying to help them. Still, Emma bit back a bitter remark and instead played along. "This place is awful!"

"No need to state the obvious."

"I don't know yours, either." The boy pointed out.

"Norman." Norman shook it, and Emma instantly flinched at how his hands were freezing cold.

"Your hands are warm. Where'd they keep you?"

"I'm assuming they didn't perform any physical experiments on you?"

"Uh-huh." Emma had no idea what Norman was talking about, but didn't want to risk losing someone who could potentially be her friend, so she agreed anyways.

"So…are you a cat or dog person? Emma inwardly cringed at her pathetic attempt at making small-talk, but continued, "Giraffes are my favorite animal, but if I were to choose between the two, I'd say dog! They're so fluffy and cute!"

"Neither. Cats are too untrustworthy and lazy. Dogs are too energetic and clingy."

"Pssh, yeah, who likes dogs anyways?! Not me!" She leaned on the wall, trying to mimic Norman's stance, but ended up almost slipping.

"Birds are kinda cool though. And fish."

Both animals seemed rather boring to Emma, but she agreed anyways, "Birds are cool! My father caught a finch once."

"You had a family? I thought everyone here were orphans!"

"I am an orphan! We just called our caretaker Father." It felt wrong to lie, but it still wasn't exactly untrue: Emma had come from an orphanage before Peter adopted her. She didn't remember it at all though since she was very young.

"Didn't know there were male caretakers…what orphanage did you come from?"

Beads of sweat started to form on Emma's forehead, "G-Glory Bell." Emma stammered. She's heard Peter mention it before. "And you?"

"Gracefield." Norman threw away the paper-towel. "It was nice meeting you, Emma. We can meet up again if you'd like…not here though."

"Come into my room! I'll keep us out of trouble. Trust me, I'm like an escape artist." She pressed the piece of paper from earlier into Norman's palm. Here: retrace my steps to go back to my room tomorrow. Same time as now."

Before Norman could respond, someone pounded on the door.

Norman looked over urgently at Emma. Hide. He mouthed.

Emma went behind a stall and stood on the toilet seat, peeking over the stall the try and get a clear view of what was going on.

"What was taking you so long? You were supposed to return 15 minutes ago! You kids are getting awfully comfortable with this new schedule."

Emma furrowed her brow. I never knew doctors could be so rude!

"Come over here you little brat." He grabbed Norman and yanked him outside.

The door shut loudly behind him.

Her father would never be mean to anyone, and most certainly not to a patient. Doctors were supposed to be good, but Emma guessed that there could be mean ones too. Yeah. The doctor was just bluffing. She'd report him to Peter, and everything would be back to normal again in Lambda.

Actually, scratch that. Better than normal, because she had a friend now: Norman.

I'm new to this fandom (Although, I should have introduced myself yesterday...)

They/Xer pronoun are what I use, btw.

My predictions on the scores/IQ of every orphan in plant 3! (the ones I found of and the ones with names.)

NOTE: THIS IS MY GUESSING, DON'T TAKE IT SERIOUSLY! THEY ARE INNACURATE!

Where do you think you're OC belongs? comment below v (I think mine would be between Lanni and Anna)

Don't like it? Suggest what they're IQ/scores are! vvv

Please don’t hate me for this

(edited by YourBasicNerd)
Yes
No
Maybe

Yes, and she was delicious
yea, she tasted alright
Hamger
No